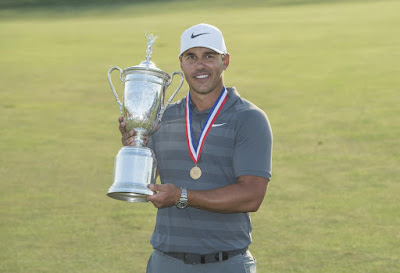 (Shinnecock Hills Golf Club, NY) – Rolex Testimonee Brooks Koepka has claimed an unforgettable victory at the 118th U.S. Open, in a successful title defence following his win in 2017, ensuring his name will not only be etched on the trophy forever, but also into the history of this inimitable championship.

Nestled in the luxurious surroundings of the Hamptons in New York state, the prestigious Shinnecock Hills Golf Club upheld the U.S. Open tradition of rewarding extreme accuracy, and after four rounds of competitive golf on the challenging 7,448-yard layout, Koepka’s final score of one-over-par, gave him a one-shot victory in the second men’s Major of the year, for which Rolex has been the Official Timekeeper since 1980.

Koepka becomes just the second golfer to successfully defend the U.S. Open in the modern era, following in the footsteps of fellow Rolex Testimonee Curtis Strange, who’s second victory was also made in the Empire State, 29 years ago.

With rounds of 75, 66 and 72, the 28-year-old Floridian co-led the tournament going in to the final round, and displaying continued precision, discipline and determination, scored five birdies in a final round of 68.

Following his final round, Brooks Koepka, said: “It’s incredible. I’ve looked at all these names a million times and to have my name on this trophy is very special. I’m truly honoured to go back-to-back.”

Having co-led at the 54-hole stage, fellow Testimonee Daniel Berger ended the tournament tied sixth, recording his second career top-10 in a Major.