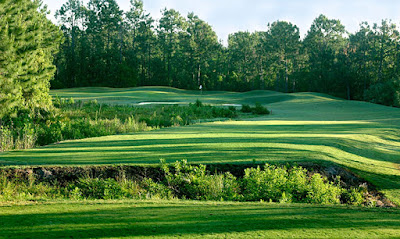 (Daytona Beach, Fla.) - Daytona Beach is a national destination, attracting vacationers from across the country to attend NASCAR races and take a drive on the area’s famed beaches. What people are less familiar with is Daytona Beach’s rich golf history.

Golfers know the area as the home of the LPGA’s headquarters and, of course, LPGA International, a highly acclaimed 36-hole facility, but Daytona Beach has been attracting players for more than 100 years.

Here are three things you likely didn’t know about Daytona Beach’s long-standing ties to the game.

- Donald Ross, who was born in Scotland before later becoming an American citizen, is widely regarded as America’s most important golf course architect. He designed Pinehurst No. 2, Oakland Hills, East Lake Golf Club and Seminole Golf Club, among many other high profile layouts. Ross also left his mark in Volusia County, designing the South Course at Daytona Beach Golf Club and New Smyrna Golf Club. Like many Ross designs, the challenge at the South Course lies in the greens complexes. New Smyrna, which opened in 1953, is the “new” Ross course. Boasting outstanding year-round conditions, it is one of the area’s hidden gems.

- When it comes to competitive golf, Daytona Beach is, understandably, closely associated with the LPGA Tour, but did you know the area is home to golf’s longest running mini-tour event - the Riviera Open? Riviera Country Club has hosted the tournament since 1960 and future PGA Tour champions are among the event’s past champions, including 7-time Tour winner Bert Yancey, Morris Hatalsky, and Billy Hurley III.

- Spruce Creek Country Club isn’t just a quality William Amick designed golf course, it’s the centerpiece of America’s largest fly-in community. That’s right, Spruce Creek is built around what used to be a U.S. Navy landing strip during World War II. Playing the eighth and ninth holes you might have a plane just a couple hundred feet over your head, adding an adrenaline rush to your quest to make birdie.

The Great American Race and the World’s Most Famous Beach are Daytona Beach’s calling cards, but the area has plenty to offer golfers in search of a memorable of trip.

For more information, go to DaytonaBeach.golf.
Posted by Blogger at 8:48 AM