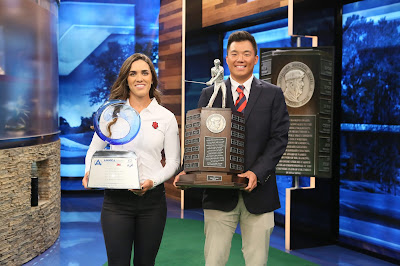 (ORLANDO, Fla.) – Arkansas junior Maria Fassi and Oregon sophomore Norman Xiong were announced tonight as winners of the ANNIKA Award presented by 3M and the Fred Haskins Award presented by Stifel, respectively, recognizing the most outstanding female and male Division I collegiate golfers as voted on by their fellow players, coaches and golf media. Fassi and Xiong joined Golf Central live in-studio for the announcements and to receive their awards.

ANNIKA AWARD PRESENTED BY 3M: Fassi, winner of six collegiate events during the 2017-18 season, also is the 2018 SEC Women’s Golf Player of the Year and a First-Team All American. Fassi will compete in the 2018 Evian Championship, the LPGA’s final major of the year, Sept. 16-19, as a result of winning the ANNIKA Award. She has amassed eight victories in her collegiate career, and is scheduled to return to Arkansas for her senior season. Hall-of-Famer Annika Sorenstam presented the trophy to Fassi.

“College golf is such a big part of these players’ careers. They work really hard and to celebrate the best player means a lot,” said Sorenstam. “This continues what we do with the ANNIKA Foundation, to help these young girls to fulfill their dreams and keep them going on their career path.”

“It means the world to win the ANNIKA Award,” said Fassi. “I admire Annika, she’s been someone I’ve looked up to since I was a young girl. To win this award and to get it from my peers, the coaches and the media, it means a lot that they thought I was worthy of it. I don’t have words to explain how excited I am and how grateful I am to be receiving this award today.

“We have one mission left to accomplish,” Fassi continued. “We are going to be working on it all year long to accomplish our mission next May.”

“It has been a really fun journey with her, and with our team as well,” said Arkansas women’s golf coach Shauna Taylor. “To watch her win six times this year, and to do it on different conditions and different golf courses, just says a lot about her game and how much she has matured and grown since she stepped on campus.”

FRED HASKINS AWARD PRESENTED BY STIFEL: Xiong capped off his collegiate career at Oregon with six victories during the 2017-18 season – most in school history for a single season – and finishing 11th at the NCAA Men’s Golf Individual National Championship. Xiong also is the recipient of the 2018 Jack Nicklaus Award and is a First-Team All-American. Xiong, who announced at the conclusion of the NCAA Championships that he will turn professional, will receive an exemption to compete in The Greenbrier Classic on the PGA TOUR, July 5-8, where he will make his professional debut.

“College golf is an individual and team sport with high integrity,” said Ron Kruszewski, Chairman and CEO, Stifel Financial Corp. “At Stifel, we are very pleased to be associated not only with college golf, but also with the most prestigious award in college golf, the Fred Haskins Award.”

“It means so much to win this award,” said Xiong. “It definitely allows me to reflect back and realize how much I have accomplished at the University of Oregon. To be on this trophy along with the names that are on here is a really big honor. I’m just really excited for what the future holds for me.”

Also on Wednesday, Golf Channel announced the winners of the NCAA Division I Women’s and Men’s Golf Coaches of the Year on Morning Drive. The 2018 WGCA (Women’s Golf Coaches Association of America) National Coach of the Year went to Alabama’s Mic Potter, whose Crimson Tide were the 2018 NCAA runners-up in the team national championship; and the GCAA (Golf Coaches Association of America) Dave Williams National Coach of the Year was awarded to Oklahoma State’s Alan Bratton, who guided his Cowboys to an 11th NCAA men’s golf team national championship.