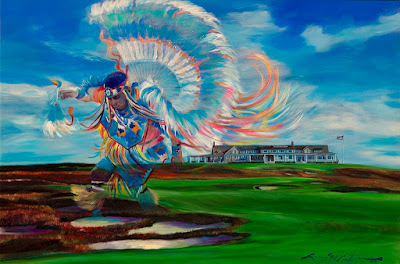 (SOUTHAMPTON, NY) – In a partnership with the Shinnecock Nation, fans on hand for the 118th United States Open Championship at Shinnecock Hills Golf Club (Southampton, New York) will have the chance to view the vibrant golf artwork of Lucy and Jace McTier (McTier Art).

The Shinnecock Indian Nation worked closely with the United States Golf Association (USGA) to develop and provide the space that will be showcasing the McTier Artwork around the NextLinks interactive attraction. 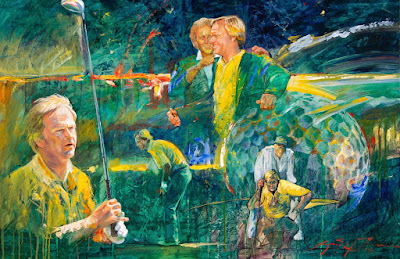 World renown sports artist, Jace McTier and portraitist, Lucy McTier, have been preserving and promoting the history and future of golf through their unique and beautiful paintings of the games greatest players including Arnold Palmer, Jack Nicklaus, and Lee Trevino to name a few. Their works of art will also include a depiction of the first round of golf played in America in Yonkers, NY, as well as the legendary Robert Tyre Jones Jr.'s first major win in the 1923 U.S. Open at Inwood Country Club in Inwood, NY.

The McTier artists have painted for presidents and sports superstars from around the globe for nearly half a century.

For more information visit www.McTierArt.com and follow them on social media @McTierArt.
Posted by Blogger at 8:52 AM