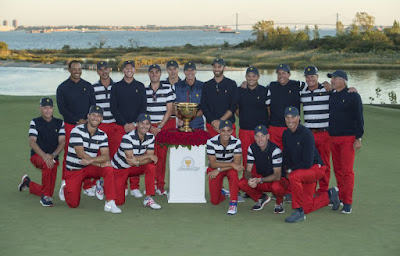 Over four days of singles, four-ball and foursomes match play at Liberty National Golf Club in Jersey City, New Jersey, the best U.S. and International golfers, including 10 Rolex Testimonee players, competed for the Presidents Cup trophy, resulting in a 19-11 win for the U.S. Team.

In sealing at least a half-point from his singles match, Rolex Testimonee Daniel Berger ensured the U.S. Team win, with a par at Hole 15, taking his match to three-up with three-to-play. The 24-year-old went on to win his match 2&1.

With this achievement, Stricker keeps the Presidents Cup on United States’ soil for an unprecedented seventh consecutive year. Stricker joins an exclusive list of Rolex Testimonees to lift the Presidents Cup as Captain including legends of the game Arnold Palmer, Jack Nicklaus and Gary Player, better known together as The Big Three. Famously, Nicklaus and Player agreed to share the 2003 Presidents Cup title after three playoff holes failed to determine a winner.

Following the final day’s play, Steve Stricker said: “These guys played so well all year long and they came here with a lot of confidence. They continued it right through this tournament. I’m so proud of them all. They never lost focus. They feel a special connection to one another."