(RELEASE) - Tour Edge Golf continued their recent success with their new CBX fairway woods and hybrids on the PGA Champions Tour with a Top 10 finish at the Dominion Energy Charity Classic, the first playoff event of the Champions Tour. 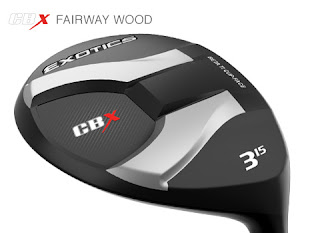 A 5-time PGA TOUR winner played a new CBX 18-degree fairway wood to a T8th finish at the Country Club of Virginia, shooting 10-under par after firing eight birdies Sunday.

According to the Darrell Survey, 10 Exotics CBX fairway woods and hybrids have been put into play the past two weeks on the Champions Tour. Last week at the SAS Championship, the CBX hybrid made its debut with a one-time Major winner and 5-time PGA TOUR champion when it went into play in the bag of the #16 ranked Champions Tour player in the Charles Schwab Cup standings.

The Exotics CBX was initially introduced to the Champions Tour at the Senior Players Championship earlier this year. Players immediately put the new club into play at the Major event, even on short notice after seeing the product for the first time during the practice week of the event.

Players putting CBX into play at the Senior Players included a recent 2017 winner on the Champions Tour and two other PGA Tour Major Championship winners.

The CBX was in play for a second-place finish that week when the 2017 winner of the Principal Charity Classic put the brand-new prototype hybrid into play after testing the club for the first time at the all-important Major Championship. The player earned $224,000 with his 2nd  place finish to move up to 5th place on the Charles Schwab Cup money list at the time.

“The Champions Tour gives us an opportunity to get feedback from the best golfers to ever walk the planet,” said Tour Edge President and Master Club Designer David Glod.  “It has been important for us to get the feedback directly from those who know best with these tour-inspired club designs where we placed the Center of Gravity higher and forward in the club head to be a spin-killer. The feedback on the performance, sound, spin, looks and feel has been through the roof phenomenal.”

So far, the players that have put Exotics CBX clubs into play on the Champions Tour, are players that account for winning 35 PGA TOUR events and five major championships in their careers.

This week the Champions Tour will continue with the second round of the playoffs with the Power Shares QQQ Championship , held at Sherwood Country Club just north of Los Angeles.

The new Exotics CBX fairway woods and hybrid were designed with a multi-material construction that includes the top of the line in Beta Titanium, Hyper Steel and Carbon Composite materials. This unique combination of three different materials helps produce a penetrating ball flight that cuts through windy conditions and lowers side spin rates for greater accuracy. They are currently the only Titanium face fairway woods and hybrids available for sale in the US market.

The Exotics CBX hybrid’s higher CG is located slightly forward in the club head through the use of a carbon fiber in the sole, which is significantly lighter than stainless steel. This helps to increase ball speed and reduce spin, which makes for less dispersion.

Tour Edge’s extremely thin Beta-titanium cup-face enlarges the ideal hitting area on the clubs. It is brazed to stainless steel behind the hitting area which allows the face to flex more at impact. This has led to independent robot tests that have shown the CBX to average more than 16 yards longer in distance than several of the best selling fairway woods on the market.

The Speed Ramp sole design on the Exotics CBX products provide reduced turf interaction so the club can maintain its speed through the hitting area.

The Tour Edge Exotics CBX fairway wood and hybrids have shipped to select authorized Tour Edge retailers. Call Tour Edge at 800.515.3343 to find a retailer near you and to see why Exotics is Materially Better.