(ATLANTA, Ga.) – Bradford Tilley, 34, of Easton, Conn., fired a 3-under-par 67 Monday to earn medalist honors in the weather-delayed 2017 U.S. Mid-Amateur Championship. Tilley posted a two-round total of 5-under 136 to edge defending champion Stewart Hagestad, 26, of Newport Beach, Calif., Scott Anderson, 35, of Columbus, Ohio, and Thomas Todd III, 30, of Laurens, S.C., by one stroke. All three players turned in 36-hole scores of 4-under 137. 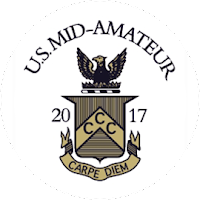 The second round of stroke play was postponed from Sunday due to the impact of Tropical Depression Nate. It was the first time the U.S. Mid-Amateur lost a full day of play due to weather since 2009 at Kiawah Island (S.C.) Club.

“It is one of the ultimate honors,” said Tilley about becoming medalist and the top seed in the match-play bracket. “It ranks very high, at the top or near the top, on my list of golf achievements.”

Tilley, who competed on professional tours for eight years before regaining his amateur status in August of 2016, birdied his first hole at the par-70, 7,207-yard Capital City Club’s Crabapple Course by hitting a 173-yard, 7-iron close to the flagstick. He made a 35-footer on the 316-yard par-4 fifth after attempting to drive the green and finding a far left bunker. He two-putted the par-5 12th for his third birdie and set up his final birdie on No. 15 when he struck a 3-iron to within 18 feet on the 215-yard par 3..

“Driving has been great, I have not missed many fairways,” said Tilley, who fashioned a 2-under 69 on the par-71, 6,784-yard Atlanta National Golf Club, the stroke play co-host venue, in the first round. “The irons, which are usually a strength of mine, have been on point. My putting inside six feet, where you need to be solid in USGA events, has been great.”

The U.S. Mid-Amateur Championship consists of 36 holes of stroke play followed by six rounds of match play, with the championship scheduled to conclude with a 36-hole final on Friday, Oct. 13, starting at 8 a.m. EDT.

Hagestad, who won last year’s U.S. Mid-Amateur  after a dramatic 37-hole final, fired a bogey-free 6-under 64 at Crabapple, which was one shot off the lowest stroke-play round in championship history. After he made a curling 12-foot putt on No. 16 for his sixth birdie of the day, Hagestad missed an 8-footer at the final hole that would have matched Jim Wilson’s 63, achieved in 2000 at The Homestead, in Hot Springs, Va.

“I like this course, it fits my game well,” said Hagestad, who competed in this year’s U.S. Open and was the low amateur in the Masters, tying for 36th. “It went from a stressful round to less stressful. I was able to focus and give myself good looks.”

A member of the winning 2017 USA Walker Cup Team, Hagestad sank a 15-foot birdie putt at the par-4 eighth and followed with consecutive birdies on holes 10 and 11. He struck a three-quarter 8-iron approach to within 8 feet at the par-3 13th for his fifth birdie. However, his round may have been set in motion when he made a 12-foot par putt on the third hole.

“It’s not like I was firmly inside the cut line to start the day,” said Hagestad, who opened with a 2-over 73 at Atlanta National on Saturday. “To be able to make a mid-range putt early in your round, it holds a lot more weight than it would have later.”

Anderson, who works as a club fitter and is playing in first U.S. Mid-Amateur, birdied two of his opening three holes at Capital City Club. He sank a 30-footer on No. 10, his first hole of the round, and made a short birdie putt at the 537-yard, par-5 12th. He made the turn at 3 under after rolling in a 12-foot birdie putt on No. 17.

“The goal is to just get through to match play,” said Anderson, who played in the 2001 U.S. Amateur at nearby East Lake Golf Club and competed professionally for five years. “If you end up the stroke-play medalist, great, but we are trying to position ourselves to move further on in the week.”

Anderson, who added a birdie on No. 4 to post his 67, carded a 1-under 70 in the opening round at Atlanta National on Saturday, which included a double-bogey 6 on his final hole. It was a finish he had to think about for more than 36 hours due to Sunday’s postponement..

“I didn’t really stress about it,” said Anderson, who saw a movie and spent time with his father on Sunday. “It is just one of those things that happens. I looked at it as a 36-hole qualifier. I birdied the first hole and erased that quick.”

Todd, who advanced to match play for the first time in his third Mid-Amateur appearance, missed a 10-foot par putt after finding the left rough off the tee on his final hole at Capital City Club in an attempt to tie Tilley. His second-round 66 included an eagle on No. 12 when he delivered a 230-yard, 19-degree hybrid to within 2½ feet. He also made five birdies to offset three bogeys.

Michael Muehr, 45, of Potomac Falls, Va., and Justin Kaplan, 29, of Houston, Texas, each shot a pair of 69s and completed stroke play at 3-under 138. Muehr, a quarterfinalist in last year’s Mid-Amateur, shot a 4-under 32 over his inward nine at Atlanta National. He regrouped with a birdie on No. 10 by striking a 4-iron to within 4 feet. Kaplan keyed his round with a birdie at No. 18, his ninth hole. He punched a 5-iron from under a tree to within 12 feet.

“I just didn’t feel good this morning over the ball,” said Muehr, a financial advisor who competed on the PGA Tour. “The birdie at No. 10 really settled me down. At that point, I said let’s try and play for the medal instead of just hold on and make match play.”

“My days are probably numbered,” said Muehr, who is playing in his seventh Mid-Amateur. “I am still competitive, but have to do it sooner than later if I am going to make a run at this thing.”

Brad Nurski, 38, of St. Joseph, Mo., and Corby Segal, 46, of Santa Clarita, Calif., joined Muehr and Kaplan at 138. Nurski, the runner-up in the 2014 Mid-Amateur, shot a second-round 67 at Atlanta National, the lowest score of the championship at that venue.

First-round leaders Chad Wilfong, 37, of Charlotte, N.C., and Joshua Irving, 31, of Dallas, Texas, each struggled on the second day of stroke play. Wilfong, who shot a 73 at Atlanta National, finished at 1-under 140. Irving, who advanced to the quarterfinals of the 2015 and 2016 Mid-Amateurs, had seven bogeys and a double bogey en route to a 78 and fell to 5-over 146, and among the 25 players who will be involved in a playoff for the final 16 spots on Tuesday morning. The playoff will start at 8 a.m. on Crabapple’s 17th hole. Live scoring and updates are available throughout the championship on usga.org.

Four-time champion Nathan Smith, 39, of Pittsburgh, Pa., reached match play for the 12th time in 13 U.S. Mid-Amateurs, registering  a two-round total of 4-over 145.

The U.S. Mid-Amateur is one of 13 national championships conducted annually by the United States Golf Association, 10 of which are strictly for amateurs.
Posted by Blogger at 10:08 AM