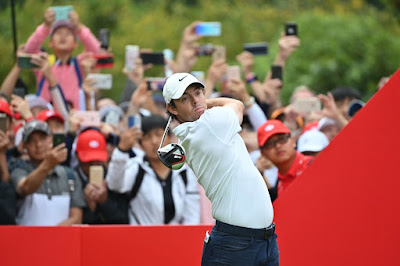 
(Carlsbad, Calif.) - After starting his 2020 PGA TOUR season with a T3 at ZOZO Championship, Rory notches up his first win of the season in Shanghai playing fourteen TaylorMade clubs and ball.
With a total of 269 (-19), Rory birdied the first hole in the playoff following a day of dominate driving and precision iron play.

- Rory becomes the first European to win 3 WGC titles
- In 2019, Rory now has 4 wins, 11 Top 5s and 18 Top 10s (record for Rory)
- Switched into TP5 from TP5X earlier this season to increase his short game spin
- Has played M5 driver with Injected Twist Face all year since Jan 2018
- Recently added a P730 PW to his bag after playing a Milled Grind 48° wedge most of the season
- McIlroy now has a total of 14 career European Tour wins
- McIlroy has moved up to 5th in the European Tour's Race to Dubai
- McIlroy's win is the 19th for M5/M6 drivers in 2019
- Currently leads the European Tour for 2019 in average strokes with 68.57
- Rory is now the 2nd youngest player to earn 4,000 OWGR points
- Rory remains at OWGR world no.2