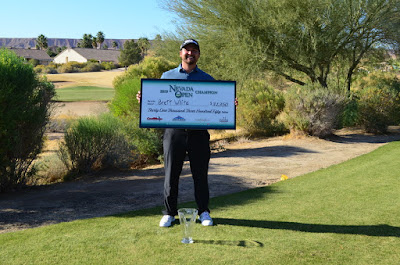 
(Mesquite, Nev.) — The three-day Nevada Open tournament hosted by Mesquite Gaming, owner of CasaBlanca Resort and Virgin River Hotel in Mesquite, Nevada named it's champion today after the final round at the CasaBlanca Golf Club. Brett White from Houston, Texas claimed the top prize at 19-under-par shooting 196 for the tournament to win the first-place prize of $31,350. The 54-hole event welcomed more than 220 players traveling across more than 25 states, all vying for this year’s increased prize purse of $150,000.

Brett White started the tournament on Tuesday at the Palms Golf Club shooting a 2-under-par 69 with four birdies on the day.  He shot a great second round of 63 at the CasaBlanca Golf Club, featuring a bogey free round with seven birdies and an eagle on the par-5 15th hole and putting him in first place entering the final round.  White backed his second round up on Wednesday with a stellar final round of 64 at the CasaBlanca Golf Club to bring home the title. He closed the tournament and secured the win by birding four out of the last five holes. White had plenty of pursuers including second place finisher Brandon Bauman from Las Vegas who finished 17-under-par for the tournament.

“The Nevada Open is a staple event for many golfers around the U.S. each year, and we saw some great players perform at a very high level,” said Christian Adderson, tournament director for Mesquite Gaming. “Now the fun continues as we begin our CasaBlanca Two Man tournament tomorrow, which features more than 100 teams.”

For final round results and tournament totals, visit golfgenius.com.