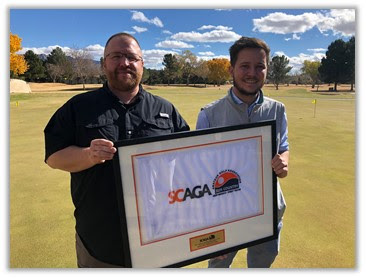 (Hobbs, NM) – Rockwind Community Links, the award-winning public golf course in Hobbs, New Mexico, has been recognized as an outstanding golf facility and Club of the Year by the Sun Country Amateur Golf Association. The award was presented at the SCAGA annual meeting this past Saturday at El Paso Country Club.  The SCAGA member clubs include New Mexico and West Texas.

“We are so lucky to have a club in our membership like Rockwind,” said SCAGA Executive Director, Dana Lehner. “The facility is not only one of our best but is really how a golf operation should be run in the 21st century with their immediate community in the forefront of their mission.”

Rockwind opened in 2015 as one of the country’s first examples of a “community links,” a phrase coined by the course architect Andy Staples where the focus of the entire project was to link the golf course to the fabric of life in Hobbs. The facility is considered a trailblazer in uniting golf with the local community. A special feature is a surrounding trail system complete with multiple trail heads, various outdoor seating areas, picnic spaces and scenic viewing points, including access to the site’s five acre lake.

Rockwind Community Links has received numerous awards from leading industry publications including: Ranked #3 in New Mexico in Golfweek Magazine’s annual Best Courses You Can Play List for 2018; inclusion in Golf Digest’s 2017 Best in State course ratings at #8; named one of Golf Digest’s Best New Courses of 2015; and a Top Five New Golf Development in the World by Golf Inc. Magazine. The United States Golf Association also singled out Rockwind for breaking the mold and being more than just a golf course in a special video entitled “A Model Muni: Rockwind Community Links.”

“We are honored to be recognized by the Sun Country Amateur Golf Association as their Club of the Year,” said Doug McDaniel, Parks and Recreation Director in Hobbs.  “We have enjoyed playing host to multiple SCAGA amateur championships and we look forward to continuing our involvement as a popular tournament destination with the top amateurs in the state.”