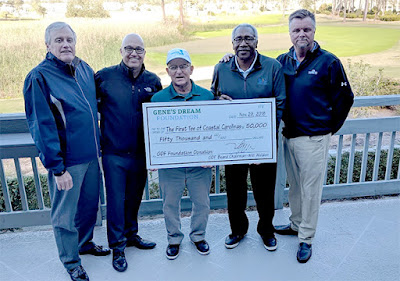 “Game-Changing” Donation was a Result of Mentor Cup

The money was raised via the Mentor Cup, a two-day event that included a gala dinner at the Surf Club, a tournament at Tidewater Golf Club, and an unforgettable stand-up performance by the legendary David Feherty.

The Gene’s Dream Foundation was created to honor Gene Weldon, a revered PGA professional who worked in the Myrtle Beach market for nearly 50 years before passing away in 2017. Weldon mentored countless kids during his career, including golf media star Kelly Tilghman, who founded the organization.

"It’s an honor and a privilege for our entire team to be able to see Gene’s wishes through," said Kelly Tilghman, who founded Gene's Dream and the Mentor Cup. "It’s such a bonus to be able to deliver this kind of return in our first go-round, thanks in large part to the passionate support from our community. The inaugural Mentor Cup weekend exceeded everyone’s expectations. We look forward to continuing this mission."

"As a foundation in honor of my father, we are proud to continue his dream of having a positive impact on the lives of children through the game of golf," said Wil Weldon, president of the Gene's Dream Foundation. "Our goal is to grow The Mentor Cup in order to create a sustainable resource for the children in our local communities.  We hope to continue his dream for many years to come."

“That $50,000 is a real game-changer for the First Tee of the Coastal Carolinas,” said Rich Abraham, the executive director of the First Tee of the Coastal Carolinas. “We operate very lean, and this will help us expand our programs for kids along the Grand Strand and in Brunswick County. Beyond the financial impact, events like the Mentor Cup are great for our kids, giving them a taste of competition and the opportunity to be mentored by community leaders.”

The golf tournament featured a unique format as 60 kids were paired with 60 adults and each nine featured a different format of play. The front nine was captain’s choice while players played modified alternate shot on the back at Tidewater, one of the Grand Strand’s most scenic courses.

For more information, go to GenesDream.com or MentorCup.com.
Posted by Blogger at 1:15 PM