(LIBERTY CORNER, N.J.) – Jennifer Kupcho, the 2018 NCAA Division I women’s golf individual champion at Wake Forest University and a member of the victorious USA Curtis Cup Team in June, has been selected by the USGA to represent the USA in the 2018 Women’s World Amateur Team Championship at Carton House near Dublin, Ireland, next month. She is an automatic selection because of her position in the latest World Amateur Golf Ranking™. 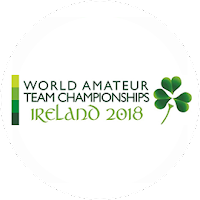 Kupcho, 21, of Westminster, Colo., will be one of three competitors for the USA in the 28th Women’s World Amateur Team Championship, playing for the Espirito Santo Trophy (Aug. 29-Sept. 1). The Republic of Korea won the 2016 championship, with the USA finishing sixth at Riviera Maya, Mexico.

“Jennifer is a terrific young woman and golf talent who represented the United States at this year’s Curtis Cup Match,” said Stasia Collins, USA team captain. “We couldn’t be prouder to have her as our ambassador in Ireland.”

Earlier this summer, the USGA announced a series of revisions to the association’s selection process for international teams that provide for some automatic selections, as well as creating more transparency into how the remaining selections are made.

To learn more, visit usga.org.
Posted by Blogger at 3:30 PM