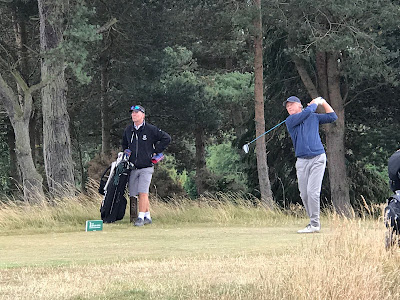 (ST ANDREWS, Scotland) – NBC Sports and Golf Channel analysts Brandel Chamblee and Gary Koch will be trading in their microphones for golf clubs this week, as both took co-medalist honors in their respective Senior Open qualifiers on Monday to compete in the 2018 Senior Open presented by Rolex, taking place Thursday-Sunday, July 26-29 the Old Course at St Andrews, the Home of Golf.

Chamblee turned in a 2-under par 69 at the Scotscraig Golf Club qualifier to take co-medalist honors with two-time PGA TOUR winner John Inman. Koch carded a 3-under par 68 at the Lundin Links qualifier, tying with England’s Jonathan Cheetham for medalist honors.

“St Andrews means a lot to everybody in the golf world. But it holds a special place in my heart because I spent the summer of 1982 in Scotland, and one of the highlights of my career was playing in The Open in 1995,” said Chamblee. “So to bring my career in the game full circle, from the amateur game to the PGA TOUR to the Senior Open, I couldn’t be happier to have made the field and to play amongst some of the best players to have ever played the game. It’s a real treat for me to see a side of the game that I haven’t known for 15 years.”

“It was a lot of fun. I had a chance to play the golf course Sunday and Monday before heading to Carnoustie and going to my real job,” said Koch. “I kind of knew what to expect. I liked the golf course right away. It is a true links. It probably helped watching the guys play at Carnoustie and how they went about it. Judging the flight of the ball and the amount of roll once it hit the ground. I played well. I’m very pleased.”

Golf Channel analysts Jerry Foltz and Rex Kuramoto also entered Senior Open qualifying on Monday, where nearly 600 professionals and amateurs from around the world competed for the opportunity to walk the fairways of St Andrews this week at The Senior Open. Foltz and Kuramoto both shot 5-over 76 at their qualifying venues and did not advance.

“Brandel, Gary, Jerry and Rex share a deep passion for the game and alongside their television careers continue to play golf at a high level,” said Molly Solomon, executive vice president of content and executive producer, Golf Channel. “It’s a terrific accomplishment on any day but particularly after their week of work at Carnoustie, stepping straight out of the broadcast booth and onto the course. Now Brandel and Gary get to take one of the most special walks in all of golf – down the fairways at St Andrews.”

Golf Channel and NBC will combine to air 20 hours live coverage of The Senior Open presented by Rolex Thursday-Sunday. Rich Lerner and Hall-of-Famer Lanny Wadkins will serve as play-by-play host and lead analyst. John Mahaffey will report from an outer tower, and John Cook and Billy Ray Brown will report from the course. Todd Lewis will conduct interviews and report for Golf Central.