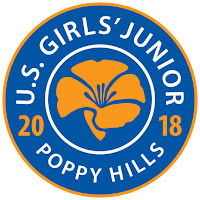 Only half of the 156-player field completed the second and final round of stroke play due to a 4½-hour fog delay before play could begin. Play was suspended for the day due to darkness at 8:18 p.m. PDT, and will resume on Wednesday at 7 a.m. The field will then be cut to the low 64 scorers for match play.

Li, No. 9 in the Women’s World Amateur Golf Ranking™ (WAGR), won’t have to worry about being in the draw. The only drama on Tuesday was whether she would match or break the 36-hole scoring mark held by Taylore Karle, who shot 130 in 2005 at BanBury Golf Club in Eagle, Idaho. That mark also stands as the lowest total recorded in any USGA amateur competition that features 36 holes of stroke play followed by match play.

Li’s 131 matched the total of Angel Yin in the 2014 Girls’ Junior at Forest Highlands Golf Club in Flagstaff, Ariz.

For her part, Li was unaware of her flirtation with golf history.

“Nobody told me anything. Honestly, it doesn’t matter,” she said. “It’s just stroke play right now.”

Li, a member of last month’s victorious USA Curtis Cup Team, came to the 18th hole, an uphill par 5 measuring 485 yards, needing a birdie to match Karle’s record. She stuffed her 100-yard, pitching-wedge approach to 5 feet, only to slightly mishit the birdie putt. Li said her ball striking was as good as on Monday when she matched the championship’s 18-hole scoring mark with a 9-under 62.

She finished with four birdies and two bogeys.

“I didn’t putt as well,” said the two-time U.S. Women’s Open competitor who made headlines in 2014 when at age 11 she became that championship’s youngest-ever qualifier. “I think they put a couple of tougher pins out there. There were a few that were right over the false fronts and some tucked pins.”

Seay, one of four five-time U.S. Girls’ Junior competitors in the field, backed up her first-round 67 with a 1-under 70. Yujeong Son, of the Republic of Korea, a semifinalist in 2017, carded a 3-under 68 to finish eight strokes behind Li at 139.

Yealimi Noh, 16, of Concord, Calif., teed off late in Round 2 a day after shooting 5-under 66 and completed six holes on Tuesday at 2 under par. She is 7 under par for the championship as she looks to make history on Wednesday when play resumes.

NOTABLE
Lucy Li is bidding to become the seventh player in U.S. Girls’ Junior history to earn medalist honors in consecutive championships. The last two players to accomplish the feat – Inbee Park (2002-2003) and Ariya Jutanugarn (2011-12) – each have gone on to win the U.S. Women’s Open, the former twice.

Through the morning wave, the course was playing two-tenths of a stroke harder than Monday. The scoring average was 77.0 to 76.8 on Monday.

Should a playoff be necessary on Wednesday to determine the final match-play spots, holes 17 and 18 will be utilized.

QUOTABLE
Lucy Li (62-69–131), of Redwood Shores, Calif., on the possibility of being medalist two consecutive years:
“It would be great if I was medalist two years in a row. The main goal is to get through stroke play and when the match play starts, it’s a completely different tournament.”

Li on what she did to pass the time during the fog delay:
“I looked through my course notes and hung out in the player locker room. We were playing Jenga and everyone was making s’mores. It was fun.”

Brooke Seay (67-70–137), of San Diego, Calif., on dealing with the 4½-hour fog delay:
“It’s definitely a challenge to be here for six hours before [teeing off]. It was difficult to warm up and warm up again. It’s something everyone [who had a morning tee time] had to deal with in some way. It’s tough. But there’s not much you can do about it. You just have to stay patient and stick to your game. And once you get out there, you have to forget that it even happened, and do the best you can.”

Seay on the performance of Li:
“She’s playing awesome. I haven’t seen her play, but to shoot that out here, you definitely have to be making good shots and good putts. I don’t think she’s making mistakes.”

Seay on going from stroke play to match play:
“It’s kind of nice to reset. You just take it one day at a time from here. Every match is important. Sometimes, the danger is to worry too much about what your opponent is doing and get caught up in their game instead of sticking to your own. It’s definitely a different mentality to play against one other person instead of the course.”
Posted by Blogger at 2:16 PM