Ben Hogan is widely considered the greatest ball striker to ever play the game of golf. He was also a very private man who kept things within a guarded circle of trusted friends. 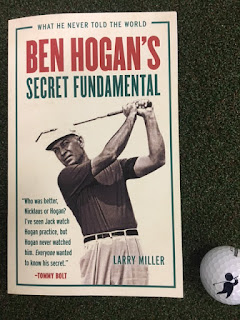 In “Ben Hogan’s Secret Fundamental,” author Larry Miller lets the reader in on some never-before-published stories from the Hawk’s incredible life ... as well as insight into some of what made Hogan such a success.

Miller, himself, acknowledges that many people think they know Hogan’s secret. Whether they read the 1955 Life article on the subject or spoke with people who had received “the” tip from the close-to-the-vest legend ... Hogan’s secret has been the topic of limitless speculation.

According to Miller, the actual secret comes down to mathematics. Geometry, to be more specific. The word parallel is bandied about quite a bit. I’m not here to tell you the secret. That’s why Triumph Books published “Ben Hogan’s Secret Fundamental.”

In all honesty, I’ve never been good at math. Beyond that, I think you need more than a book or magazine to help your swing. Nothing beats multiple, extended range sessions ... unless you add in the expertise of a PGA Professional.

What I would like to promote about “Ben Hogan’s Secret Fundamental” are the stories. Not only does Miller write about Hogan and other greats of the game, but he also lets you in on much of what he has experienced over his 60+ years in the game.

I have been captivated by golf tales ever since listening to my grandfather spin yards as a kid. Reading Miller’s experiences brought me back to a time that was special - learning to appreciate the game that my grandfather loved to much.

That said, there are plenty of useful tips in this book. Read up on Hogan’s practice drills and spectacular course management. Take those to the range or first tee with you and benefit from the Hawk’s brilliance.

Miller also closes with notes on similarities between successful putters. One of his five keys was a tremendous help to my game last year. Great putters “roll the ball, they don’t ‘hit’ it.” Next time you think “roll” and make a critical putt, you’ll thank me (and Larry Miller).