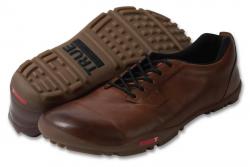 Innovative shoemaker opens online sales of next generation shoe
(DALLAS) - After successfully launching the most versatile and innovative golf shoe on the market last year, TRUE linkswear has opened online sales of its second edition shoe, the stealth. The stealth was unveiled at the 2011 PGA Merchandise Show and has been worn by TRUE co-founder Ryan Moore this year on the PGA TOUR.

Like TRUE's first release, the tour, the stealth is built on a barefoot platform, which makes it the lightest golf shoe on the PGA TOUR and features the thinnest sole in golf.

"The response we've had since the PGA Show has been incredible," said Rob Rigg, president of TRUE linkswear. "The TRUE tours have been in high demand and the retailer response has been fantastic. The popularity of the tour has led to daily emails asking when the stealth would be available. We are so excited that day has finally come."

TRUE linkswear took creative direction from Moore for the stealth, fashioning an upper that had more traditional styling with a modern silhouette. The stealth features the same performance technology as the tour, but the stealth offers a premium, oiled leather that has a distressed finish and finished with a cap toe.

Much like the TRUE tour, the stealth is meant to easily transition from a round on the links to off-the-course engagements. The TRUE stealth comes in two colors - Black with a Black sole and Brown with a Mud sole - in sizes 6.5 through 15 with a MSRP of $199. The stealth features a two-year waterproof guarantee.

TRUE footwear was inspired by an emerging barefoot trend in running, where many shoes have shifted away from highly-engineered structures, such as arch supports and heavily-cushioned heels, to a shoe that better utilizes the anatomical features of the foot. The idea is that nature's engineering is best, and that a minimalist shoe with an ergonomic traction system allows a golfer's body to naturally stabilize itself while feeling the course like never before.