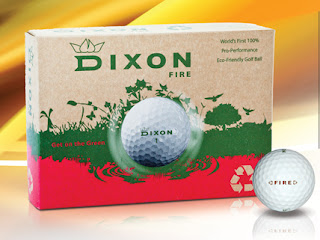 (TEMPE, AZ) - As the Wallow Fire has burned an estimated 487,000 acres forest in North Eastern Arizona, Dixon Golf has announced that they will be fighting fire with Fire; offering a 25 percent discount on Fire ball sales through Sept. 1, with 25 percent of Fire ball sales going to the Arizona Red Cross Grand Canyon Chapter. To take advantage of the offer, simply visit www.DixonGolf.com and use the promo code "FIRE".

According to The Tucson Citizen on June 16, the fire is still less than 30 percent contained and 40-plus mile per hour winds are only making containment more difficult. The 25 percent discount translates into roughly $14 per dozen sold being donated to the Red Cross to help the relief effort.

"Unfortunately, stories like the Wallow Fire will be out of the spotlight in a short time, while it can take the victims of the fire years to recover. The nice thing about golf is that people continue to play, and will continue to need golf balls. We may not extend the story, but we can do our little part to donate to a very good cause helping people affected by this tragedy," says Dixon Golf CEO William Carey.

The Fire ball made a splash when it was released last July as the first tour-caliber eco-friendly golf ball on the market. In the 11 months since, the golf ball's performance has earned praise from such respected media outlets as Golf Tips Magazine's 2011 Golf Equipment Buyer's Guide The A Position and Vogue Magazine. Not only do players and editors inside the golf industry like the ball, but it's used by celebrities like Don Cheadle, Kevin Sorbo, Anthony Anderson and Josh Duhamel.

"There hasn't been a week that has gone by that I haven't received an email, phone call or personal anecdote from someone who has converted to the Fire ball. It's simply been that impressive," adds Carey.