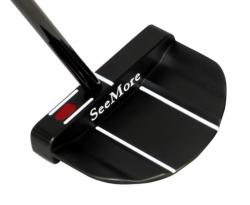 (Franklin, TN) - SeeMore introduces the new m5x, a visually sleek and striking new mallet design, 100 percent milled in the USA, offered for the player who is most comfortable with the look of a larger center shaft mallet.

The m5x features a unique sole design and weight design which optimizes the benefits of SeeMore's patented and proven RifleScope Technology alignment system, by allowing the putter to swing on the golfer's natural plane, whether that be closer to a natural arc or straight back and straight through stroke.

The m5x also includes a bi-metal design with a milled aluminum face insert for optimal feel and performance. The m5x has a single top line and two sightlines on the back flange, and is available in 3 material and finish options.

SeeMore Facts
SeeMore originally became recognized when Payne Stewart won the 1999 U.S. Open playing a SeeMore
putter in the greatest final round putting performance in US Open History. The brand was re-launched
in 2007, and immediately regained worldwide prominence as Zach Johnson used a SeeMore FGP to win the 2007 Masters. SeeMore's website at www.seemore.com and www.seemoreputtersblog.com has many new features about SeeMore's remarkable legacy, technology, and tour success. SeeMore putters are custom made in Franklin, TN.