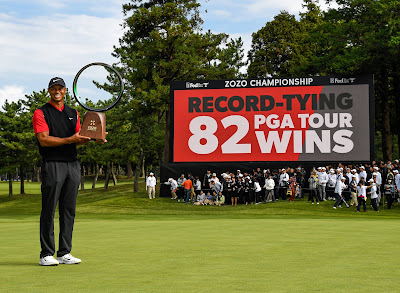 
(COVINGTON, GA) — Tiger Woods authored another page in the annals of golf history this weekend, as he used his Bridgestone TOUR B XS ball to earn his 82nd PGA TOUR victory, tying him with Sam Snead for the most all-time, at the TOUR’s first ever official event to be contested in Japan.  Remarkably, Woods’ win at the ZOZO CHAMPIONSHIP means he’s achieved his 82 wins in 66 fewer starts than it took Snead. Woods’ first win of the new season also gives Bridgestone its first of the 2019-20 wraparound schedule - as the most efficient TOUR Team in golf looks to continue the momentum that it achieved last season.

Woods overcame a bogey-bogey-bogey start to open the tournament, recording an astonishing 19-under par final score, winning by three shots with the Bridgestone TOUR B XS. Woods made 27 birdies for the week to propel him to his 8th ever season-opening victory and his first title ever in Japan – marking the 7th different country in which he’s won. The win also marks the 19th season in Woods’ illustrious career in which he has won at least one official PGA TOUR event.

“82 PGA TOUR victories in this era of deep tournament fields and incredible competition is truly a remarkable achievement, and we’re honored to have played a small part in it,” said Dan Murphy, President and CEO of Bridgestone Golf. “We are proud that Tiger played a ball made by Bridgestone in 64 of those 82 journeys to the winner’s circle, and we were with him for some of the most memorable moments along the way.  And, the fact that Tiger achieved this milestone in the home country of our parent company makes it that much sweeter.”

The Bridgestone TOUR B XS has been a constant in Tiger’s bag since he first put the ball in play in 2018, though Tiger has continued to tweak his club selection during that time. The TOUR B XS fits Tiger’s game perfectly as it offers the ideal combination of power, spin and control he demands. The TOUR B golf ball series is a result of Bridgestone’s continued commitment to providing premium tee-to-green performance to players of varying swing types. Bridgestone owns over 800 golf ball patents and fully leverages the company’s heritage of excellence in polymer science worldwide to design the industry’s most cutting-edge golf balls.

For more information on Bridgestone Golf’s award-winning TOUR B family of golf balls and the entire Tour team that relies upon them, visit www.bridgestonegolf.com.
Posted by Blogger at 12:00 PM