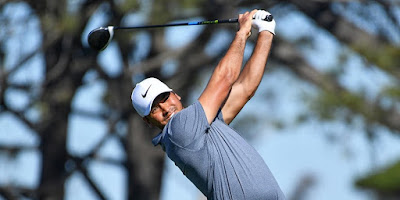 What You Need to Know:
- After testing with the Tour team in the weeks leading up to the tournament, Jason Day settled on TaylorMade's new M3 driver (10.5° turned down to 9°) with one weight all the way forward and the second, 1" back of neutral. Day loves Twist Face Technology in the M3 because it minimizes the diving hooks he occasionally misses with on high-toe strikes. For the week, he averaged over 321+ yards off the tee.
- TaylorMade’s 2018 M Drivers featuring Twist Face Technology now have victories in 3 of the last 4 PGA tournaments (as well as 1 European Tour event in that timeframe), with Day joining TaylorMade stablemates Dustin Johnson and Jon Rahm as tournament champions on the PGA TOUR.
- Day's victory is his eleventh on the PGA TOUR and fifteenth as a professional.
- Day continues to use the P750 irons, which he first put into play in Kapaula last year. His setup has remain unchanged, using 3-PW with True Temper's Dynamic Gold X7 shafts.
- Day's wedge setup occasionally varies depending on the course setup, but he's gotten comfortable with the 48°/52°/60° combination so far this year.
- Using the Spider Tour Red putter he himself made one of the most popular models on Tour and TaylorMade's most sought-after putter in the lineup, Day carded 21 birdies or better for the tournament.
- Day has praised the performance of the TP5x golf ball since he first put it into play at the Tournament of Champions in Kapalua last year. It's stamped with his tradional kangaroo and #87.
- With the win, Day moves into the early-season top 10 in the FedExCup rankings.

For more information on Day or any of TaylorMade Tour staffers' equipment, visit www.taylormadegolf.com.
Posted by Blogger at 4:04 PM

I am glad that I came across your Household Service Audit. Thanks for sharing the post. Not only Auto Insurance, but every household also needs an “Insurance” to protect themselves from all the hazards.
Great Post, thanks for sharing it with us. Have a nice weekend ??.
You Might Like Instant Farmers Insurance Online