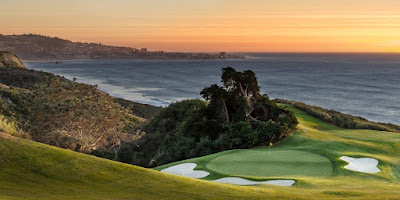 Originally designed by William F. Bell and opened in 1957, the renovated North Course now stands to rival the popularity of the world famous South Course, host of the U.S. Open in 2008 and in 2021. The North and South courses, owned and maintained by the City, are both public courses, and the North averages approximately 82,000 rounds of play per year.

“We are excited to re-open the North Course to the world golf community,” said Herman Parker, the Park and Recreation Director for the City of San Diego. “Torrey Pines is a world-renowned golf facility, and we are pleased to be able to offer two world-class courses, each with their own unique characteristics. No golf excursion is now complete without playing both the North and South at Torrey.”

Course architect and golfing great Tom Weiskopf visited Torrey Pines this week to officially unveil the renovated North Course, a project that holds a special place in his golf career and design portfolio. His first career win came at Torrey Pines at the 1968 Andy Williams-San Diego Open, predecessor to the current Farmers Insurance Open played every January at Torrey Pines.

It’s really special,” Wesikopf said. “And to work on a piece of property that amazing doesn’t happen very often. The sheer beauty of the place always captivates me. Now people can look forward to playing 36 incredible holes at Torrey Pines by playing the North and the South.”

While the North Course maintains a similar feel to its original design, there were some significant changes. The number of bunkers has been reduced from 59 to 41, and the average green size increased from 4,500 square feet to 6,400. All 18 greens were completely reconstructed to United States Golf Association standards, with the existing poa annua grass replaced with 100 percent bent grass – a Tyee 007 blend. The front and back nines were also reversed, allowing golfers spectacular ocean and canyon views as they finish their rounds. Carts paths have been replaced, and irrigation has been improved. Greens were fitted with an advanced SubAir system that pulls moisture out of the surface and can cool greens during hot weather. The work was completed on time and on budget.

“Switching the nines is very significant because the back nine is so iconic with its incredible views,” Weiskopf said. “The larger greens allow for more pin placements and more variety, and we’ve taken out bunkers but kept others that are strategically placed.”

Weiskopf’s renovations have successfully struck a balance between providing ample challenge for professional and scratch golfers and keeping the course playable for amateurs and casual golfers of all abilities. The North Course now features five sets of tees, allowing it to play as long as 7,258 yards or as short as 5,197. In total, the North has been lengthened nearly 200 yards from the tips.

“I tried to bring the North Course into the 21st century,” Weiskopf said. “It was built in the 1950s, and nothing of significance had ever been done to it. Everything we did in the redesign was to bring it up to current standards. It’s now a top-of-the-line golf course.”

A winner of 16 tournaments during his nearly 30-year career on the PGA Tour, Weiskopf owns one major championship trophy (The Open Championship, 1973) and finished third or better in six other majors.

Housed within the City of San Diego Park and Recreation Department, the City’s Golf Division manages and operates Mission Bay, Balboa Park and Torrey Pines golf courses. Its mission is to serve patrons and players of all ages and abilities while enhancing their enjoyment of the game by providing a high quality golf experience. For more information about the City’s Golf Division, visit www.sandiego.gov/golf.
Posted by Blogger at 11:54 AM