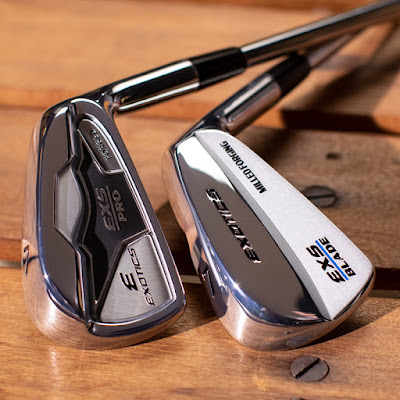 The tour-inspired irons feature the very latest in golf club design innovation for the highest levels of ultra-premium performance from the company that has earned 22 victories and over 150 different players using their equipment on the PGA Tours.

These limited-edition Exotics irons designed by Tour Edge founder and Master Club Designer David Glod are fine works of craftmanship that utilize only the finest materials and precise CNC milling.

The goal of the new designs by Glod were to combine tour-level inspired looks and feel with advanced materials and innovation to produce the most forgiveness and distance possible in a player’s iron. The result was a new level of forged irons and wedges that cannot be found in regular production irons: individually milled irons made from Carbon Steel and engineered for players who look for the ultimate in control and shot shaping.

“We received enormous demand for player’s irons after putting our focus on game improvement hollow-body irons with the EXS 220 releases,” said Glod. “As a club designer, I love player iron designs that are as beautiful as they are playable. These three designs were made to be irons that are drooled over by the core golfer, not only in looks and feel, but in how they perform.”

“We used a lot of feedback from the PGA Tour and tested these irons with our professional staff, as well as with extensive robotic testing,” said Glod. “I can report back that we have three winners across the board. I believe that the milled forged iron connoisseurs out there are going to be very impressed with the playability we were able to combine with a traditional forged feel.”

The Exotics EXS Pro is a forged cavity back iron made with higher-grade Japanese S25C Carbon Steel that delivers a soft feel and maximum forgiveness in a player’s iron design.

The forged face is CNC milled for perfect flatness and the grooves on the face are also precisely CNC milled.

Classic Shaping - The shape of the EXS Pro Forged is more compact with a shorter heel to toe, yet with a slightly thicker top line than the EXS Pro Blade for more forgiveness, while still being on the thin side to maintain a tour-preferred player’s shape.

CNC Milling - The square grooves are CNC milled for 100 percent USGA compliant grooves. The cavity in the EXS Pro irons is designed for a higher MOI and forgiveness by CNC milling to insure the deepest cavity possible in a player’s iron.

Acoustic Engineering - The cavity insert is electro-formed and combines steel, ABS polymer and a dampening gel for an improved sound and feel on the forged EXS Pro irons.
Stock Shafts:

The suggested retail price for the Exotics EXS Pro Forged Iron is $149.99 per iron for the stock shafts.

The Exotics EXS Pro Blade is a timeless muscle-back iron design that delivers a tour-preferred feel, while placing more of the buttery soft-feeling S25C Carbon Steel low and behind the hitting area for extreme versatility in shot making and shaping.

Pure Milled Forging - Designed with advanced CAD technology and pure milled forging, the EXS Pro Blades deliver a pure forged feel and sound. The micro-cavity, face and scoring lines are all individually precision CNC milled for the ultimate in responsiveness and control.

CNC Milling – Precise milling ensures every iron is USGA conforming, while providing the limit in depth in the scoring irons to provide additional spin. Milling on both sides of the
blade creates an extremely tight tolerance and consistency from iron to iron.

Carbon Steel/ Dual Chrome Finish - The Japanese S25C Carbon steel is chrome plated with a dual finish; a high polish and a satin finish in all the milled areas of the clubhead.

Rounded Sole Radius - The sole of the EXS Pro Blade iron head features a rounded radius on the leading edge of the club head. This design greatly reduces drag and turf interaction through impact to ensure the utmost in consistency on every shot.

The suggested retail price for the Exotics EXS Blade Iron is $149.99 per iron for the stock shafts. 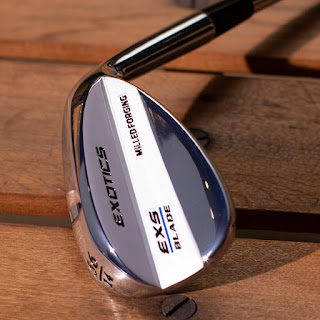 Custom Sole Grind - The EXS Pro’s sole grind reduces bounce from the heel and toe so the wedge is extremely versatile at hitting a variety of shots, especially from difficult lies. This playability, combined with the classic shape and thin top line, makes this a true player’s short game weapon.

Flare Toe Design - A Flare Toe design in the EXS Pro Blade wedge places the center of gravity higher for a lower launch and more spin. A chamfer was added to the trailing top line of the wedge for a slightly thicker top line that moves weight up without being noticeable on the top line at address.

The suggested retail price for the Exotics EXS Blade Iron is $149.99 per iron for the stock shafts.
Posted by Blogger at 12:00 PM