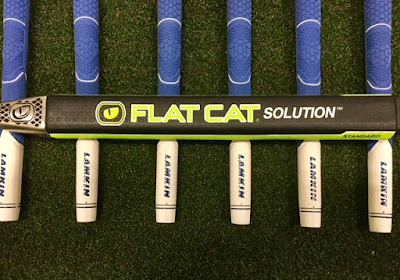 I’ve developed a love-hate relationship with golf over the last few years. I love to play golf, but I hate putting. I can’t tell you how many potential birdies have turned into pars or bogies.

I was about to give up and accept the fact that my sub-30-putt rounds were a thing of the past. Then my buddy began raving about his new FLAT CAT putter grip. Unlike a traditional putter grip, each side of the FLAT CAT is in a parallel plane with the putter face.

Flash back to my last round of golf (pre-FLAT CAT): I had a six-foot birdie putt and I had the perfect read - inside, right edge. That’s about as simple as it gets. I stood over the putt and made a confident stroke, only to have the ball shoot directly left off the face. I didn’t mis-read the line nor pull the putt. It was all in my grip. At impact, my putter face was closed due to my grip.

Now, four weeks later, I’ve got the FLAT CAT on my putter and that doesn’t happen any more. If I miss, it’s because of incorrect speed or a poor read.

Whether you use a traditional putting style or left-hand low, saw, claw - whatever - the FLAT CAT design squares the hands to the putter face and provides alignment to the intended target line.

The company claims that FLAT CAT grips “immediately improve putting consistency and accuracy.” I can attest to this. Combine a good stroke with an accurate read and the ball will find the hole - eliminating the possibility of a poor grip.

Visit lamkingrips.com to learn more about FLAT CAT. And, for a limited time, you will receive 20 percent off of your order. That knocks the $24.99 price down to $19.99.
Posted by Blogger at 2:19 PM