(RELEASE) - Former PGA TOUR champion Tim Petrovic played an Exotics CBX fairway wood to a fourth place finish at the 2017 PGA TOUR Champions National Qualifying Tournament at TPC Scottsdale Dec. 1. Petrovic fired rounds of 68-62-65 to jump out to the lead in the all-important qualifying event before shooting a 72 to finish T4 and secured one of only five fully-exempt PGA Champions Tour cards for 2018. 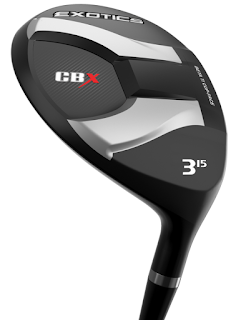 Petrovic is playing a 15 degree Exotics CBX 3-wood, the new club from Tour Edge that was designed to reduce spin with the world’s first Titanium face, Stainless Steel body and Carbon Fiber sole design. It’s also the only fairway wood on the U.S. market featuring a Titanium face.

Facing a field of 78 players competing over 72 holes for five fully-exempt cards in 2018, Petrovic, the winner of the 2005 PGA TOUR Zurich Classic, improved his status on the Champions Tour after a solid year that saw him finish 63rd on the Charles Schwab Cup with six Top 25 finishes.

“We’re excited that we could be a part of helping Tim secure his full card at Q-school,” said Tour Edge President and Master Club Designer for Tour Edge David Glod. “The Exotics CBX metalwoods caught fire the last few weeks on the PGA Champions Tour and have started to do the same on the PGA TOUR. These clubs feature a hot Titanium face that no one else is offering and the spin reduction is unlike anything we’ve ever seen. We’re happy to help where we can, especially in a Q-school event that means so much to the players on how many events they get to play in next year.”

Despite the only consideration for playing the Exotics CBX fairway woods and hybrids being performance-based, the Exotics CBX ranked in the top eight models in play in both the hybrid and fairway wood model counts over the last four events of the season.

Tour Edge had the fifth most metalwoods in play among active manufacturers over the last month on tour, according to the Darrell Survey. Even when the stakes were highest at the end of the season, five new players that had never played a Tour Edge club in a professional event changed to the new Exotics CBX over the last four weeks of the Champions Tour.

Exotics CBX clubs earned three Top 5 finishes, four Top 10’s and five Top 20 finishes in the 2017 Champions Tour despite only being introduced to players at five total events this season.

The Exotics CBX features a higher CG that is located slightly forward in the club head through the use of a carbon fiber in the sole, which is significantly lighter than stainless steel. This helps to increase ball speed and reduce spin, which makes for less dispersion. Tour Edge’s extremely thin Beta-titanium cup-face enlarges the ideal hitting area on the clubs. It is brazed to stainless steel behind the hitting area which allows the face to flex more at impact.

This has led to independent robot tests that have shown the Exotics CBX to average more than 16 yards longer in distance than several of the best selling fairway woods on the market. The Speed Ramp sole design on the Exotics CBX products provide reduced turf interaction so the club can maintain its speed through the hitting area.