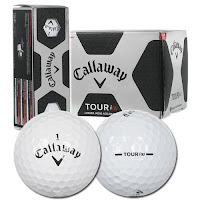 Callaway distinguished itself with products earning a Gold Medal in all three categories: $20 and under (per dozen), $21-$30, and $40 and over. Top-Flite once again led the Innovation score with its Top-Flite Gamer franchise earning its fourth straight Gold Medal.

Callaway, which dominated the equipment Hot List released earlier this year by earning more Gold Medals than any other manufacturer, was again distinguished throughout this year's ball Hot List. Leading the way for Callaway was a Gold Medal for the Tour i(s)/Tour i(z) models, which have both been optimized for 2011.


Digest wrote of the 2011 Tour i Series balls, "Callaway's high moment-of-inertia (MOI), dual-core technology has proved to be a technological success."

Among the 29 balls evaluated by Golf Digest's robot testing, the Callaway Tour i(s) ball produced more RPMs of spin on half-wedge shots than any other ball, indicating its remarkable greenside control.

In the $20 and under category, Callaway and Top-Flite combined for two Gold Medals. Callaway's Gold was earned by the HX Diablo Ball, a soft, two-piece ball with a high-resiliency core that offers great feel and distance for a variety of swing speeds. In the ultra-competitive $21-$30 category, Callaway struck Gold with the new HX Diablo Tour ball, a three-piece model that earned five stars in both Performance and Innovation, and is turning heads at $26 per dozen.

For the fourth straight year, the Top-Flite Gamer franchise was distinguished with a Hot List Gold Medal in the $20 and under category. Of this year's Top-Flite Gamer V2, Golf Digest stated, "this ball's technology defies its price point," and added that it's "smarter and more versatile through the bag than any ball in its category."

Marine Signs Manufacturers - Marine Signs manufacture and install bespoke illuminated yacht signs and boat names. The name and style of your design represents you as an individual and you only get one chance to make a first impression.