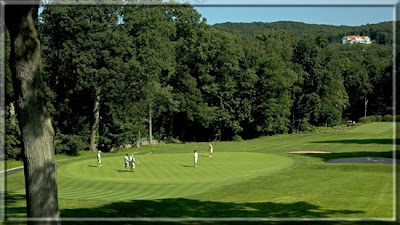 Noted golf course architect Jim Urbina-who won raves for his role in creating Old Macdonald, the newest course at Bandon Dunes Golf Resort in Oregon-has devised a master plan for the prized A.W. Tillinghast golf course. Urbina fell in love with the New City property when he visited for the first time last August. His primary goal is to restore the golf course to the true integrity of Tillinghast's original 1920 design.

"You talk about a hidden gem, this course wasn't listed in any book!" says Urbina, who had to do a great deal of research before taking on the project. "But when it's done, Paramount is going to open people's eyes.

"Over time, courses don't expand. Tees, greens, bunkers, fairways-everything gets smaller. I want to bring back the expanse, the broad views and beauty that original owner Adolph Zukor and A.W. Tillinghast once saw," Urbina added.

Acquired by a private family in 2009, Paramount Country Club is already a very different and greatly improved facility from the old Dellwood. Nearly $5 million has been invested in renovating the clubhouse, grounds, pool area, and 12 tennis courts. A nine-bedroom cottage for members and guests has been modernized and a fitness center added. The existing snack bar will be replaced later this year with an indoor/outdoor Paramount Bistro that will reinvigorate the club's casual dining operations.

The club has a vibrant history, dating back to its days as the weekend property of movie mogul and Paramount Pictures founder Zukor, who used it to entertain the great celebrities of the 1920s. In fact, it was Thomas A. Edison who introduced Zukor to Tillinghast, one of the leading architects of golf's "golden era."

The golf course has been changed over the decades by the effects of nature and 90 years of play: Urbina and the new owners are dedicated to bringing the course back to Tillinghast's original vision, including the incorporation of some long-lost and rarely seen architectural elements. The restoration will be accomplished in segments, starting this spring, and the course will remain open for play during the process.

"As part of our passion for this project, we wanted to bring all the elements together under one name that reflected everything Dellwood has been and the greatness we see in its future," said Jeff Mandelbaum, a representative of the owner. "As we phase in the new name, we'll also be phasing in more projects that exhibit our excitement for the property."