Miracle on the Green! Three Aces, One Hole, on One Day at Calvert Crossing Golf Club 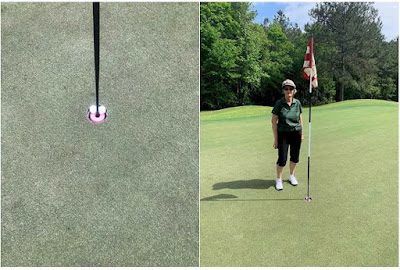 (Calhoun, Louisiana) – Husband and wife, Buck and Jo Stein, and friend Jim Turner pulled off the nearly impossible on April 17, making three aces on Calvert Crossing Golf Club’s 124-yard, par-3 5th hole. The odds of this amazing occurrence are about the same as winning the Powerball. The probability of an average golfer making a hole-in-one is roughly 12,000 to 1. The chances of two people acing the same hole, on the same day, from the same foursome are roughly 64 million to 1 range – according to the National Hole-In-One Registry. Add in a third person, hitting from the same tees and the statistics are off the charts.

Upon arriving at the 5th hole, Turner was third to play and hit an 8-iron from 124 yards, while Buck Stein went last (fourth) and hit a 9-iron from the same distance, noting the pin was just below the second tier of the green or center- left of the green.

“All of the other players were already in their carts ready to drive to the green and nobody knew that either of our balls were in the hole until pulling up to the green,” said Buck Stein. “It was unbelievable that both balls stayed in the cup with the foam COVID-19 blocks in place.”

I could not believe it,” said Turner. “I was so struck with excitement, I only took a photo of the balls in the cup and did not think to ask the group to take a photo of Buck and me together, but then we could not get close or high-five anyway under all the COVID restrictions.”

About an hour later, Jo Stein used a 5-wood, “for some added distance, as the wind had picked up,” from 124 yards.

“I thought the ball was real close to the pin,” explained Jo Stein. “I asked Angela Martin if it was in and she used her range finder to see the ball.  Angela then jumped up and down screaming ‘It’s in the hole!’”

Married for 56 years, the Stein’s have played at Calvert Crossing an estimated 2,000 times over the last 18 years, but had never aced the short par-3. In fact, Buck and Jo have a 3.3 and 3.5 scoring average respectively on the hole. Turner estimates that he’s played the course 2,080 times over his 20 years at the Club and carries a 3.3 scoring average on the hole.

“The bar is not open at Calvert Crossing during the COVID-19 crisis, so Harolyn, Angela and I plan to celebrate after the restrictions are lifted,” said Jo Stein.

“If the bar had been open, there would have been some celebration for sure,” added Buck Stein. “Instead, we called family members and friends to tell them about the holes-in-one.”

Buck Stein has been playing golf for about 50 years, and Jo has been playing approximately 38 years. Jo plays regularly with Ms. Falgoust and Ms. Martin, while Buck and Jo play together an average of three to five times per month. Turner started playing golf in high school and has never had a golf lesson. Turner and Buck Stein are usually paired together one to two times per month.

Managed by Troon’s Honours Golf division, Calvert Crossing Golf Club is located in the West Ouachita Parish of Louisiana and is one of the premier private golf clubs in the area. The Club features a modern, 18-hole layout co-designed by John Floyd (who worked under Jack Nicklaus) and Bill Zimmerebner, and is carved through the rolling hills of Calhoun. Members enjoy the beautiful and peaceful “walk in the woods” the golf course provides along with casual dining, and access to special member events.

To search a best supplier of golf balls is not so complicated but you must select a reliable and fast delivery shop where you can buy Srixon Golf Balls on discount rate. Best4balls is one of the best online store to purchase them. Because of great experience, they easily know the customers’ needs. There professional are ready to give advice to purchase balls and provides timely delivery. On Srixon Golf Balls you can put your unique text like name or logo and give it to your friend as a gift. They can deliver golf balls worldwide as whole sale rate. If you want to start a golf business, it would be a great opportunity for you to get Srixon Golf Balls as whole sale and you would get maximum revenue.