(MINNEAPOLIS, Minn.) - In a championship abundant with newcomers, familiar faces also continued to make their presence felt at The Minikahda Club on Monday with victories in the Round of 64 of the 63rd U.S. Senior Amateur Championship. 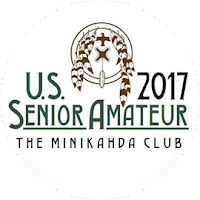 The U.S. Senior Amateur is one of 13 annual national championships conducted by the USGA, 10 of which are strictly for amateurs. The championship is open to amateurs at least 55 years of age with a Handicap Index® not exceeding 7.4. It consists of two rounds of stroke play, after which the field is cut to the low 64 scorers for match play, which concludes with an 18-hole final on Thursday at 7:30 a.m. CDT.

Stroke-play medalist David Brown, who is making his championship debut, advanced, 3 and 2, over Scott Smith, and he was joined by defending champion Dave Ryan and 2016 runner-up Matt Sughrue. Ryan, of Taylorville, Ill., was one of four Senior Amateur champions to win on Monday, out of the six who had advanced to match play.

The No. 5 seed in match play, Ryan, 63, defeated the No. 60 seed, Michael Rowley, 1 up, in a match he trailed after nine holes. Ryan took the lead in the match with a birdie on the par-3 11th hole, and he added a winning birdie on No. 14, but Rowley was able to square the match both times. Rowley bogeyed No. 15 to give Ryan a 1-up lead once again, and he missed a 10-foot, downhill birdie putt on No. 18 that would have sent the contest to extra holes.

“Michael was a tough opponent today. It could’ve gone either way. To be honest, I was fortunate to beat him,” said Ryan. “The last two holes we both had great birdie putts, I could have made them or he could have made them, we both missed. That was the match right there.”

A championship-match encore is still possible, with Sughrue on the other side of the match-play draw as the No. 2 seed. Sughrue, of Arlington, Va., won, 3 and 2, over No. 63 David Szewczul. With the match all square through 10 holes, Sughrue went on a birdie-eagle-birdie run, making a 2 on the par-4 12th hole, which was playing just 270 yards on Monday. His birdie on the par-5 13th hole moved him to 3 up.

Brown, 56, knew first-hand not to take medalist honors as a harbinger of match-play success. In the 2002 U.S. Mid-Amateur at the Stanwich Club, in Greenwich, Conn., Brown was the No. 63 seed in the match-play draw and defeated the co-medalist in the Round of 64, the only other time he had advanced to match play in a USGA championship. On Monday at Minikahda, the tables were turned, and as the medalist, he faced stiff competition in Scott Smith, the No. 64 seed.

Brown fell 2 down through nine holes after Smith made a birdie putt from about 50 feet, and despite not carding a birdie on Monday, Brown won five of the next seven holes to secure a 3-and-2 victory.

“When you’re 2 down, and you’re running out of real estate, it’s hard. When it’s, ‘If you don’t get this done, you’re going home,’ it’s just a little bit more pressure,” said Brown, of Ligonier, Pa. “You can win the first three holes and wind up losing the match.”

Included in the group of quarterfinalists to advance to Tuesday play was John McClure, of Los Angeles, Calif., who was victorious, 4 and 3, over Robert Polk. McClure made just one birdie during 36 holes of stroke play Saturday and Sunday, but kicked off his match Monday with back-to-back circles on his scorecard to take a 2-up lead. He was 5 up with five holes to play before closing out Polk on the 15th hole.

“You do it once and you want to get back there again,” said McClure, 58, of the run he made in 2016 at Old Warson Country Club in St. Louis, Mo. “It’s been motivation all year to play well in this tournament, keep your game in shape and try to get back here and see if you can go a little further.”

Joining Brown as one of the 16 U.S. Senior Amateur rookies to advance to the Round of 32 was Gene Elliott, of West Des Moines, Iowa, who raced out to a 4-up lead through eight holes over 2014 champion Patrick Tallent before notching a 6-and-4 win. The medalist in the 1999 U.S. Amateur at Pebble Beach, Elliott is in his first year of Senior Amateur eligibility. Frank Vana, of Boxford, Mass., who turned 55 on Aug. 21, was another newcomer to advance, as was Scott Thomas. Thomas, 59, lives in Chesterfield, Mo., but grew up less than 20 minutes from Minikahda in Hopkins, Minn.

Winners of Tuesday morning’s Round-of-32 matches will tee it up again in the afternoon in the Round of 16. By day’s end, the championship’s quarterfinalists will be determined.
Posted by Blogger at 1:42 PM