(LOS ANGELES, CA) - New family friendly caper movie with a golf twist, THE SQUEEZE DVD, will be available on DVD at various retailers, and on most major Video on Demand providers, June 9. 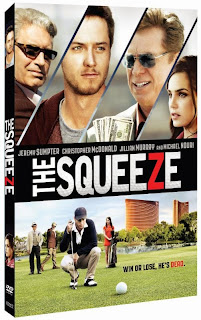 THE SQUEEZE is about a humble young man from a small rural town who gets caught in between two notorious gamblers in high stakes golf matches until the stakes become life and death. It stars Jeremy Sumpter, Jillian Murray, Christopher McDonald and Katherine LaNasa. Seven-time Emmy award winner and legendary sports producer Terry Jastrow wrote and directed this highly acclaiming film.

Notable figures previewing THE SQUEEZE have praised it:

* Jack Nicklaus, Greatest Golfer of All Time: "I watched THE SQUEEZE with Barbara and really enjoyed it. It's a fun movie that tells an interesting story, and the golf elements are so real you actually believe it could happen."

* Judy Rankin, Top Female Golf Commentator: "You keep saying to yourself "and this is based on a true story!" Incredible. A must see movie."

* Tom Watson, 8-major championship wins: "Director Terry Jastrow injects reality into the scenes that golfers will find both familiar and believable, which has been sadly lacking in all previous golf movies."

* Phil Mickelson, 5-major championship wins: "THE SQUEEZE is a wonderful golf movie because it's so authentic. It hooks you in the beginning and stays interesting and entertaining right to the end."

* Jim Nantz, CBS Sports Top Announcer: "THE SQUEEZE is written and directed by legendary golf producer Terry Jastrow, and produced by his wife Anne Archer. It's a good one too. Very impressive."

* Al Michaels, NBC Sports Top Announcer: "The script is wonderful, especially the end which came as a surprise! Christopher McDonald and Michael Nouri turn in boffo performances. Sign them up for the sequel - now."

In addition to comments by notable people, THE SQUEEZE has received over 50 positive reviews across multi-media channels.