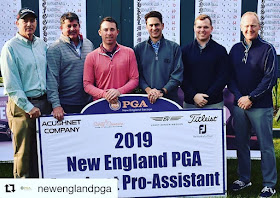 (Mashpee, MA) – Jim Clay, Director of Golf at The Club at New Seabury and Dominic Scopone, 1st Assistant Golf Professional at the Club of New Seabury, teamed up to win the 2019 New England PGA Acushnet Pro-Assistant Championship, May 20.

The New Seabury duo shot 64 (-7) late in the day at Bay Club of Mattapoisett in the 18-Hole, Four-Ball Stroke Play event. Clay and Scopone carded six birdies on their front nine before adding two more, while two teams were in the clubhouse at -6.

“We really got it going holes two through eight. We seemed to ham-and-egg it, a lot of ham, a little bit of egg, he had six birdies,” Clay said after the round. “We were just hitting it close,” Scopone added. “Jim hit one to about three feet on the first hole and then we just kept the momentum going.”

Added Chris Card, President & Executive Director at The Club at New Seabury, “What a great way to start off the season for our staff. I knew we had high caliber team of golf professionals here at New Seabury but to have Jim and Dominic team up to win the New England PGA Acushnet Pro-Assistant Championship is a nice kick off to the golf season. It confirms how lucky we and our members are to have such fine guys leading our golf program.”

Scopone most recently served as an Assistant Golf Professional at Andalusia Country Club in La Quinta, California.  Previously, Dominic was an Assistant Golf Professional at The Old Overton Club in Vestavia Hills, Alabama under Jim Clay for two seasons.  He also served as an apprentice at Milwaukee Country Club, Emerald Dunes and Easthampton Golf Club.  Originally from Ann Arbor, Michigan, Scopone is a graduate of the Professional Golf Management Program at Ferris State, where he earned a degree in Business Administration. In March of 2017, Dominic earned his Class ‘A’ PGA Membership.
Blogger at 6:30 AM