(HUNTINGTON BEACH, CA) – Cleveland Golf/Srixon congratulates staffer Andrew Putnam for earning his first professional win at the Web.com WNB Classic held at Midland Country Club, in Midland, Texas.  The 25-year-old second-year pro from Washington, shot an 8-under 64 in Saturday’s third round to open up a seven-stroke lead over his nearest competitor.  Putnam was only able to complete 7 holes for an eight-stroke lead on Sunday before high winds forced the cancellation of the final round.  Sustained winds of 28 mph with gusts up to 50 mph forced officials to call off the final round with the standings reverting back to 54 holes, where Putnam still held his nearly insurmountable lead. 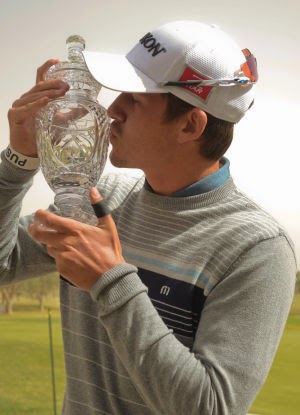 "Seven shots was a big margin and I was playing well, but you never really know how it's going to work out," Putnam said. It's a bummer that we couldn't play it all the way out. I'm sure it would have been a different feeling walking up 18 with a big lead.”

Putnam earned $108,000 to climb from sixth to second on the money list with $248,273, more than enough to earn a spot on the 2015 PGA Tour. Putnam’s older brother, Michael, is on the PGA Tour this season after winning the Web.com Tour money title last year.  Andrew and Michael Putnam are only the second set of brothers to win on the Web.com Tour.